The meeting was intended to advance the friendship between FDAAA and NDA and identify areas of potential collaboration to most effectively advance global public health. The high-level Chinese officials made their interest clear: they see value in engaging FDAAA directly to gain insight into lessons learned and gain forward-leaning insight in several targeted areas. FDAAA expressed its sincere interest in engaging with the Chinese NDA and sharing the experiences in rapidly-developing areas of US FDA regulation as China engages in its transformational regulatory reform efforts.

Director General Yuan opened the meeting, voicing appreciation for the FDAAA visit and our work. He walked the group through the evolution of his agency over the last few decades from SDA to SFDA to CFDA to the newly established, likely-to-be-called NDA (or possibly CNDA). He shared that the reformed NDA will focus on registration, supervision, and management of drugs, devices, and cosmetics.

Given that it is the prerogative of the National People’s Congress to reevaluate the NDA every five years, frequent reforms will likely continue. The biggest difference with this most recent reorganization is that food safety is now shifted to the superior organization, SAMR (State Administration for Market Regulation), which he described as a minister-level agency, the equivalent to the level of our DHHS in the US.

Reform of the agency is now underway; it will occur in two phases, and is intended to strengthen drug regulation and adapt to the rapid development of innovation and the market economy. The ultimate goal for the leadership of China’s NDA is to “provide better products for our people and improve efficiency of review and approval and quality of product.”

After over two years of reform, NDA can point to what it considers substantial results. The CDE staff totaled less than 200 when Phase 1 began; it is now over 800. The registration application backlog, which was over 22,000 in 2015, is now less than 4,000. Mr. Yung talked about how the speed of review and approval has been increased dramatically. He believes the philosophy of regulators in China has changed and thus has sent a clear signal to industry that the agency is facilitating innovation.

Under Phase 2, which began in August of 2017, the General Office of Central Committee and State Council jointly issued a directive on review and approval and innovation in order to encourage innovation of drugs and devices to better serve public health.

This reform will likely borrow from key learnings from the US FDA, such as: creation of the Orange book, IND review (in particular, the multi-disciplinary subject expert team review model for clinical trial applications), and establishing patent protection and patent linkage systems.

Part of this reform agenda has been to bring the Chinese system more in-line with international standards. For example, China joined a number of important international organizations like the ICH, ICMRA (International Coalition of Medicines Regulatory Authorities}, and IMDRF (International Medical Device Regulators Forum). The participants in the meeting pointed to the fact that China chaired the IMDRF meeting in Shanghai in March this year.

Recently China also applied to be ICH management committee member, hoping to make an active contribution to ICH while learning from ICH and work to harmonize its standards with those of other countries.

We took the opportunity to highlight FDAAA’s recent strategic planning efforts and its vision for assisting regulators globally. We shared examples of innovative, supportive collaborations our volunteer have initiated supporting regulators like our FDA Alumni Advisor Program established initially with FDA’s Office of Regulatory Affairs. We congratulated NDA on its vision for a modernized medical product review process which is focused on safety, efficacy and innovation. We also recognized NDA for recently being elected to be a Management Committee member of ICH at the recent June 7th, 2018 ICH Annual meeting in Japan.

During the meeting, NDA and FDAAA agreed that there were a few areas of mutual interest and possible meaningful cooperation that should be considered in terms of sharing expertise and experience. These areas are:

Our next step, from the FDAAA perspective, will be to ask the FDAAA International Network to meet and propose to the Board an approach for the NDA and to identify the most impactful synergies where we might collaborate with NDA. Although our resources are finite, this is a great opportunity to help leverage our expertise for the benefit of global health. We will be seeking FDAAA volunteers to staff this initiative and share their expertise.

Director General Yuan and his NDA colleagues indicated that they look forward to our feedback and assigned a specific point person with whom we should work.

We ended the meeting agreeing that NDA and FDAAA share the same goal – to protect and promote the public health. We acknowledged the value of vigorously exploring how we might work together to accomplish this important global objective. 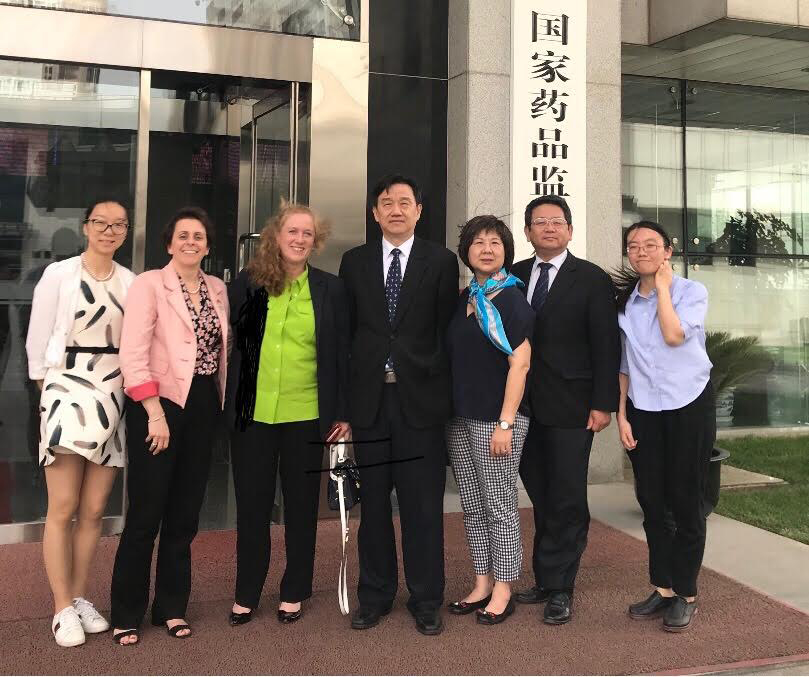