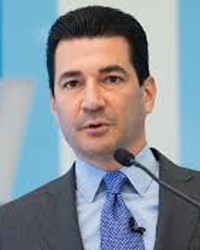 On May 11 Dr. Gottlieb became the FDA Commissioner. Here is how the FDA web site (https://www.fda.gov/AboutFDA/CentersOffices/ucm557569.htm) announced his arrival:

“Dr. Scott Gottlieb was sworn in as the 23rd Commissioner of Food and Drugs on May 11, 2017. Dr. Gottlieb is a physician, medical policy expert, and public health advocate who previously served as the FDA’s Deputy Commissioner for Medical and Scientific Affairs and before that, as a senior advisor to the FDA Commissioner.

“He also worked on implementation of the Medicare drug benefit as a senior advisor to the Administrator of the Centers for Medicare and Medicaid Services, where he supported policy work on quality improvement and the agency’s coverage process, particularly as it related to new medical technologies.

“In 2013 Dr. Gottlieb was appointed by the Senate to serve on the Federal Health Information Technology Policy Committee, which advises the Department of Health and Human Services on healthcare information technology.

“Dr. Gottlieb was previously a Resident Fellow at the American Enterprise Institute, and a Clinical Assistant Professor at the New York University School of Medicine in Manhattan, where he also practiced medicine as a hospitalist physician.

“He completed a residency in internal medicine at the Mount Sinai Medical Center in New York, New York and is a graduate of the Mount Sinai School of Medicine and of Wesleyan University, in Middletown, Connecticut, where he studied Economics.”