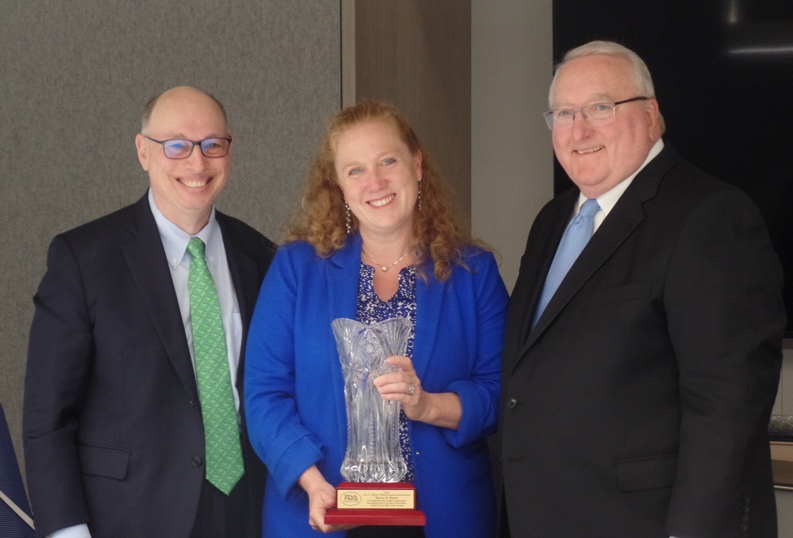 The FDA Alumni Association (FDAAA) is adding a name to its Founder's Award, which recognizes outstanding leaders of the FDAAA. The award will now be known as the John C. Villforth Founder's Award.

John Villforth's vision, energy and leadership led to the creation of the FDAAA 2002. He navigated the association through its early years and provided the foundation for the present organization.

Villforth is a former director of the Center for Devices and Radiological Health and its predecessor, the Bureau of Radiological Health. A former member of the U.S. Public Health Service Commissioned Corps, he held the rank of Rear Admiral and Assistant Surgeon General and served as the Corps' Chief Engineer. After three decades of federal service, he became Executive Director of The Food Drug and Law Institute and served on several industry boards.

Starting in 2000, Villforth recognized the need for an organization representing FDA alumni. He met with alumni associations from other government agencies, and simultaneously recruited other FDA alumni to join his effort. His goal was to create and maintain an organization that could unite all FDA alumni and provide a framework in which they could continue public service. The original FDAAA board had representatives from every part of the Agency.

Villforth was trained as an engineer, and was a proud graduate of Penn State University. He and his wife have three daughters.

The John C. Villforth Founder's Award recognizes FDAAA leaders who have "made significant and visible contributions to promoting the growth and visibility of the FDAAA." Another award issued by the FDAAA is the Harvey W. Wiley Award, which recognizes leaders who have made lasting contributions to FDA and its mission. Villforth himself was a recipient of the Wiley Award.

Announcement of the renaming of the Founder's Award in honor of John C. Villforth was made at this May 13, 2019 Annual FDAAA meeting.

Dan never served on the Board. Dan Michels received the Service Recognition award in 2013 and the Volunteer of the Year for 2015 He was a Charter member and only served as Chair of the Nominating Committee. Dan also worked with Andy on the FDA mentoring program.

Andy Bonanno started as an Investigator in LOS-DO in 1974. He joined the FDA Alumni Association as a new member in 2008, shortly before retiring from a 34 year career with FDA’s Office of Regulatory Affairs (ORA). He became active in the association and was elected to the board of directors in 2009, moving onto vice-president in 2011, and later Vice-Chair. He spent about 7 years on the executive committee, helping lead and guide the association forward. In 2018, after the maximum allowable 3 terms on the board of directors, Andy steps down from the board and the position of Vice-Chair, leaving behind 10 years of service and some notable accomplishments:

As FDAAA Secretary, Dr. C.K. Gund provides the support and leadership to facilitate the conduct of the FDAAA’s business, which includes everything from scheduling and organizing every detail of the Executive Committee, Board, and Annual meetings to conducting yearly voting for Officers and Board members. She has served in this capacity since 2012. Her excellent writing skills are demonstrated in the records of Board actions. CK uses exceptional communication skills to keep abreast of various committees’ activities and their members, and acts as a conduit between the committees and FDAAA leadership. She knows and applies the FDAAA governing documents at Executive Committee, Board, and Annual meetings, guiding procedures within legal boundaries. She does all this with diligence and commitment and a sense of humor – from a remote location. CK’s organizational and communication skills have significantly contributed to promoting the growth of the FDAAA. Her efforts exemplify the true spirit and intent of “Serving those who have served.” As with any organization, it is critical that someone provide the organizational glue to promote and support the organization. CK is that glue.

Karen Carson, as Chair of the Member Services Committee, has handled the entire membership procedures by herself for a couple of years before she gained a team member to assist her. She has organized the membership process so that it works efficiently in providing new members’ information and handling questions as they arise. In addition, she informs the various Chairs immediately when a new member expresses a desire to work on their committee. She also has managed the invoice procedure so it is seamless and is prepared to report on the organization’s total membership at each Board meeting. In addition, she and her team member maintain the FDAAA Directory and update it regularly to assure that the proper information is noted. Karen is willing to go above and beyond her responsibilities and does so as the organization’s Secretary’s right arm. She attends each Board meeting to take notes of the various actions due to the Secretary being unable to attend and jumped in to handle all of the Secretary’s duties when the Secretary was unavailable. She works with the treasurer is assure that when the membership invoices are paid, the amount is documented in the finance report. She is willing to assist any and all Directors, Officers and Chairs and has provided many new insights to various problems. Karen can always to count on for being there with her organizational and wonderful personal attitude for all the organization’s members. She is certainly one whose actions truly meet the statement, ‘serving those who have served.’ She is one great dynamo!!!

In Grateful Recognition as Former FDAAA Board Chairman, Long-Time Board Member & Assisting the Finance Committee