Dr. Fauci was appointed Director of NIAID in 1984. He oversees an extensive portfolio of basic and applied research to prevent, diagnose, and treat established infectious diseases such as HIV/AIDS, respiratory infections, diarrheal diseases, tuberculosis and malaria as well as emerging diseases such as Ebola and Zika. NIAID also supports research on transplantation and immune-related illnesses, including autoimmune disorders, asthma and allergies. The NIAID budget for fiscal year 2017 was approximately $4.9 billion. 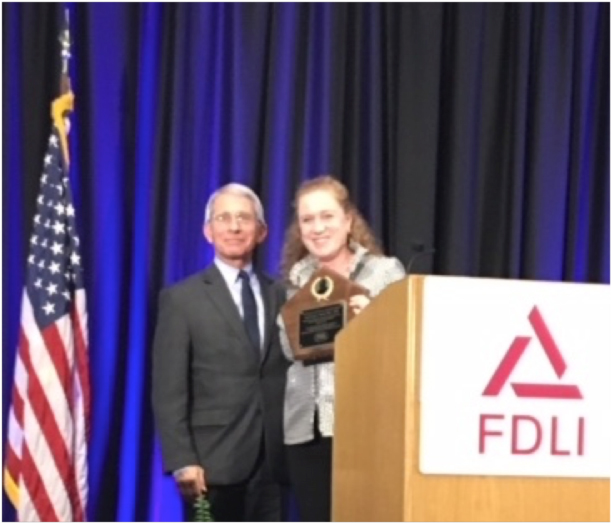 Dr. Fauci has advised five Presidents on HIV/AIDS and many other domestic and global health issues. He was one of the principal architects of the President’s Emergency Plan for AIDS Relief (PEPFAR), a program that has saved millions of lives throughout the developing world.

Dr. Fauci also is the long-time chief of the Laboratory of Immunoregulation. He has made many contributions to basic and clinical research on the pathogenesis and treatment of immune-mediated and infectious diseases. He helped pioneer the field of human immunoregulation by making important basic scientific observations that underpin the current understanding of the regulation of the human immune response. In addition, Dr. Fauci is widely recognized for delineating the precise ways that immunosuppressive agents modulate the human immune response. He developed effective therapies for formerly fatal inflammatory and immune-mediated diseases such as polyarteritis nodosa, granulomatosis with polyangiitis (formerly Wegener's granulomatosis), and lymphomatoid granulomatosis. A 1985 Stanford University Arthritis Center Survey of the American Rheumatism Association membership ranked Dr. Fauci’s work on the treatment of polyarteritis nodosa and granulomatosis with polyangiitis among the most important advances in patient management in rheumatology over the previous 20 years.

Dr. Fauci has made seminal contributions to the understanding of how HIV destroys the body's defenses leading to its susceptibility to deadly infections. Further, he has been instrumental in developing treatments that enable people with HIV to live long and active lives. He continues to devote much of his research to the immunopathogenic mechanisms of HIV infection and the scope of the body's immune responses to HIV.

In a 2017 analysis of Google Scholar citations, Dr. Fauci ranked as the 24th most highly cited researcher of all time. According to the Web of Science, he ranked 11th out of more than 1.9 million authors in the field of immunology by total citation count between 1980 and January 2018.

Dr. Fauci has delivered major lectures all over the world and is the recipient of numerous prestigious awards, including the Presidential Medal of Freedom (the highest honor given to a civilian by the President of the United States), the National Medal of Science, the George M. Kober Medal of the Association of American Physicians, the Mary Woodard Lasker Award for Public Service, the Albany Medical Center Prize in Medicine and Biomedical Research, the Robert Koch Gold Medal, the Prince Mahidol Award, and the Canada Gairdner Global Health Award. He also has received 43 honorary doctoral degrees from universities in the United States and abroad.

Margaret Ann Hamburg is an American physician and public health administrator. She served as the 21st Commissioner of the U.S. Food and Drug Administration from May 2009 to April 2015. Hamburg was the longest-serving FDA commissioner since David A. Kessler, and was the second woman to hold the position. Forbes named her as one of the world's 100 most powerful women multiple times, most recently in 2014

In 1991 Hamburg was appointed Commissioner of the New York City Department of Health and Mental Hygiene. In 1997, President Bill Clinton appointed Hamburg as Assistant Secretary for Planning and Evaluation at the U.S. Department of Health and Human Services. She served in this policy role until 2001 when she became the founding Vice President for Biological Programs and later the Senior Scientist for the Nuclear Threat Initiative, a foundation dedicated to reducing the threat to public safety from nuclear, chemical, and biological weapons. Hamburg was nominated by President Barack Obama in March 2009 to become Commissioner of the Food and Drug Administration and was unanimously confirmed in May 2009. As FDA Commissioner she was known for advancing regulatory science, streamlining and modernizing FDA's regulatory pathways, and globalization of the agency, as well as the implementation of the Family Smoking Prevention and Tobacco Control Act (2009), the Food Safety Modernization Act (2011), and a review of the system for the evaluation and approval of medical devices.

Robert Temple serves as CDER's Deputy Center Director for Clinical Science and also Acting Deputy Director of the Office of Drug Evaluation I (ODE-I). He has served in this capacity since the office's establishment in 1995.

Dr. Temple received his medical degree from the New York University School of Medicine in 1967. In 1972 he joined CDER as a review Medical Officer in the Division of Metabolic and Endocrine Drug Products. He later moved into the position of Director of the Division of Cardio-Renal Drug Products.

In his current position, Dr. Temple oversees ODE-1 which is responsible for the regulation of cardio-renal, neuropharmacologic, and psychopharmacologic drug products. Dr. Temple has a long-standing interest in the design and conduct of clinical trials. He has written extensively on this subject, especially on choice of control group in clinical trials, evaluation of active control trials, trials to evaluate dose-response, and trials using "enrichment" designs.

Richard M. Cooper is one of "Washington's Top Lawyers" for Food and Drug law by Washingtonian magazine (December 2011) and one of the "Best FDA Lawyers" (2012). His principal area of practice is food and drug law, particularly relating to medical products and including advising and enforcement (e.g., inspections, warning letters, administrative sanctions, injunction proceedings and criminal proceedings). He was lead counsel in a commercial arbitration that, in 2007, resulted in an award of more than $395 million for his client. Other recent and current matters include litigation over a product-related decision by FDA, defense against a claim of false advertising, defense against claims of improper pharmaceutical pricing and resolution of FDA enforcement actions. As lead counsel, he argued successfully in FDA v. Brown & Williamson Tobacco Corp., 529 US 120 (2000). He has represented clients in congressional and other hearings. His clients have included major pharmaceutical and other consumer products companies.

Steve Usdin - Mr. Steve Usdin, Washington Editor of BioCentury Publications, in his reporting and TV broadcasts, has focused on understanding how influences from politics to global competition impact on virtually all of the matters that FDA deals with on a daily basis.

Linda Suydam - Dr. Suydam recently retired as President, Consumer Healthcare Products Association (CHPA). Before joining CHPA, Dr. Suydam served in a variety of positions at FDA with the Center for Devices and Radiological Health and the Office of Commissioner, rising from the level of program analyst to senior Associate Commissioner during her 21 year tenure.